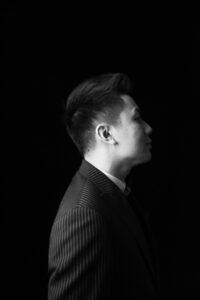 V.N. Trinh is a visiting instructor in the Africana Studies program at Lafayette College. His research and teaching specialties revolve around race and racism, urban history, African American history, Asian American history, and twentieth-century United States history. His monograph-in-progress, “Burning All Illusions: Race and Rebellion in the City of Angels, 1950-1992,” uncovers black and Korean Angelenos’ fights for justice in an age of law-and-order policing. Built upon years of archival research conducted across California, the project reflects his firm commitment to excavating phenomena otherwise buried in the historical record by listening through archival silences and reconsidering subjugated knowledges. Trinh’s other interests include historical memory, public humanities, and oral history. He proudly hails from the San Francisco-Oakland Bay Area.

AFS 270, Tuesdays, 1:10 – 4:00
“An American Century Across the Pacific” is a reading- and discussion-intensive seminar on race and empire throughout the United States, Asia, and Hawai’i from 1893 to 2001. The course centers not only whites, Asians, and Kānaka Maoli entangled in the Pacific Ocean’s vortex, but also the African American, Asian American, and Latinx activists who regarded imperialism as an issue of political and moral urgency. Specifically, students investigate the imperial projects and anti-colonial movements of the so-called “American Century,” the complex and sometimes contradictory natures of U.S. domestic and foreign politics, the real and imagined connections that bound people together across the Pacific, and the myriad ways that empire returned home.

AFS 245, Thursdays, 1:10 – 4:00
“Race, Policing, and Justice in U.S. Cities” is a reading- and discussion-intensive seminar on race, policing, and cities in the United States from the 1890s to the present. Implicitly and sometimes explicitly, it is also a course on justice and its myriad meanings. Specifically, students investigate the roles of racial segregation and economic disinvestment in manufacturing a criminal underclass; the narratives of urban danger that informed anti-crime policy; the origins, logics, and impacts of modern policing; and the historical agents who navigated and resisted entangling networks of policing, surveillance, and incarceration. As the course advances chronologically, it encourages students to think critically about historical systems from urban segregation and settler colonialism to mass incarceration and broken windows. Cities under examination include Los Angeles, New York, Philadelphia, and Washington D.C.